HA note: The following is reprinted with permission from Lana Hope’s blog Wide Open Ground. It was originally published on May 15, 2014.

I will be at my parents for a couple of weeks, so I am scanning pages of some of our old curriculum. I thought I’d paste a couple of pages from our writing curriculum, The Institute for Excellence in Writing.

Writing was always our weakest and most neglected subject. My mom is a math and science person, and she cannot write well. Many of the traditional English curriculum of the 90s, furthermore, focuses on the mechanics of grammar (Jonny wrote about this on the Friendly Atheist yesterday), but we rarely wrote more than a paragraph.

Then came the Institute for Excellence in Writing, which was marketed as a way of integrating writing into one’s current curriculum.  My mom, not knowing how to write, bought into the writing-made-easy approach.

I hated it, and this did not last many months. The IEW approach to writing is basically this: (1) take your current subjects/school reading. (2) Make an outline of the reading. (3) rewrite it in essay format. (4) Then add “dress ups.”

Here’s a couple of pages that I scanned from the June 2000 seminar workbook. This is their examples. You can see the original paragraph, and then the outline and rewritten version the students made. 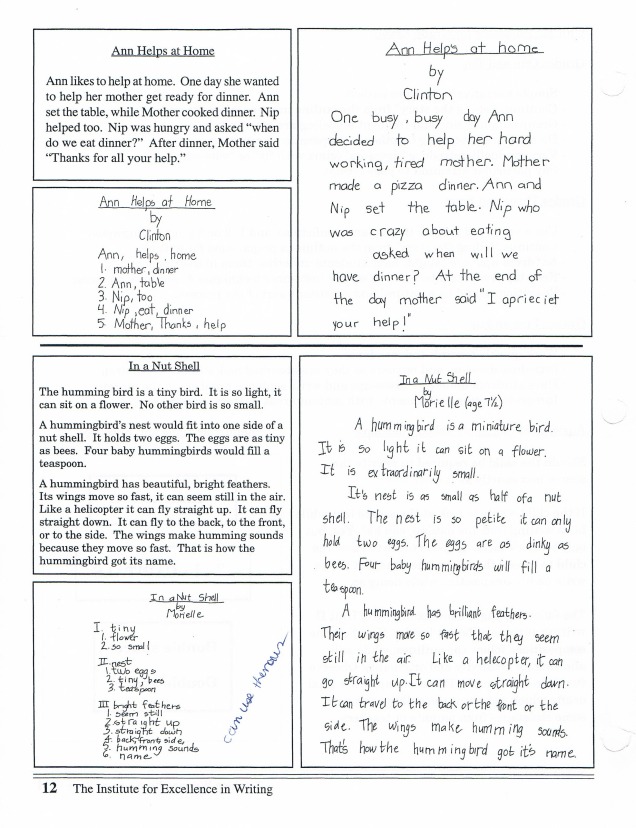 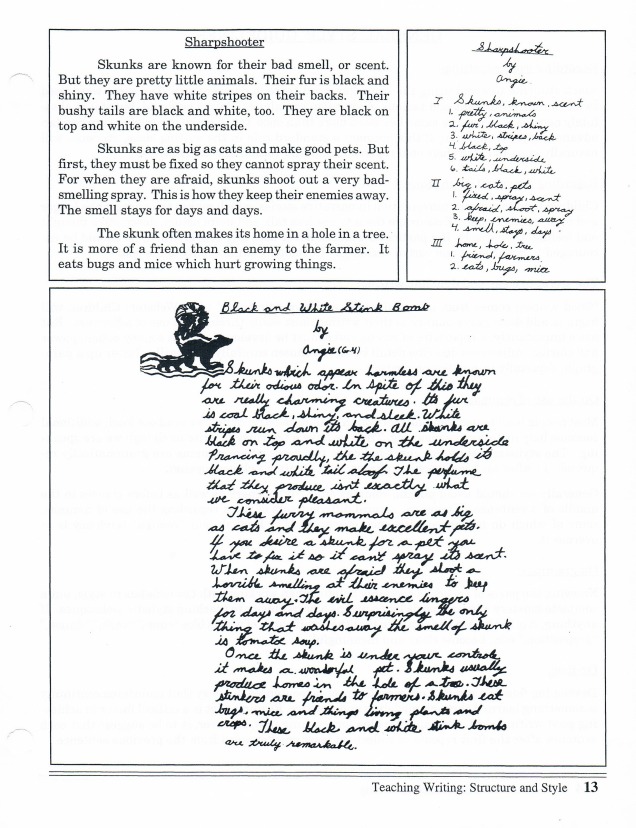 After this, students are encouraged to revise and edit by adding dress-ups. This means students are required to include words such as because, who or which, adverbs (the book includes an adverb sheet), strong verbs, quality adjectives, and at least one other subordinating conjunction in each paragraph.

Now this went over very poorly in my house. Mom, the math person, would read our paragraphs. It was deemed good or bad by whether or not we included certain words and had a topic sentence. Copying ideas from encyclopedias, textbooks, or the internet was totally okay – as long as we had included the magical words.

This was a disaster.

I quickly called crap because even I knew that one does not write well by forcing oneself to rewrite someone else’s sentences with the word “because.”

A requirement to include adverbs is also poor advice. As one of my English professors in college told me, as he marked out adverbs in my papers, “Lana, if you can use a strong verb to get the idea across, don’t use an adverb.” Obviously there are times for adverbs, but no student should be forced to include unnatural adverbs (with the exception of special assignments).

Copying ideas from other people is also unethical. I don’t know how to put this any other way. But “rewriting” an idea does not mean the student is not plagiarizing. In fairness, copying ideas without giving credit may not have been the intent of the Institute. I assume the focus of this is to learn to do reports. Nevertheless, nowhere did I read, nor was I told, that I had to give people credit for their ideas. Additionally, since I was following the examples (seen above), where the student was rewriting the paper sentence-by-sentence, we also were rewriting the material sentence-by-sentence – almost. Not idea-by-idea, but sentence-by-sentence, and we were not giving people credit for the idea. This is an issue because we were not 7 (okay, my sister may have been, but I was not).

Fast forward to college. I rewrote someone else’s idea in my own words on a daily assignment, and my professor told me I had plagiarized. After speaking to me, he realized I had sincerely not known that I should say “according to X.”

Jonny at Leaving Fundamentalism has written a lot on how much homeschoolers relying on methods of cheating throughout school. Because we do not have specialized teachers, we students rely on the teachers books, and even as I have just showed, rewriting other people’s ideas. It’s poor education.

I should mention that my family is not the only homeschool family who believed that rewriting ideas meant that we had not plagiarized. On this Amazon review, a homeschool parent writes:

My daughter, who is now in 9th grade, told me she learned so much from this program. It helps a student to read, interpret, recall pertinent facts, and retell without plagiarizing. . .  I love the concept of drawing out 3-5 pertinent words per sentence.

But it’s still plagiarizing if the student does not state the source (this parent may have mentioned this to her child; I do not know). It’s also not plagiarizing to quote someone word-for-word as long as the student provides the citation; something else I was never taught.

I did google to see if the IEW has clarified that students still need to do a citation. It appears as if some of the later curricula has. However, I am not the only one who has raised concern that this has not been emphasized in every book. I found this comment by a homeschool mother of older children; she is also a college teacher.

While I appreciate the focus on the stylistic details of writing, I do wish that there was emphasis on source citation. This may be provided in other IEW curricula. When a student simply changes the wording of a piece, this doesn’t make it that student’s writing. It still belongs to the original author. Since Level C is for older students, I believe it is very important to emphasize this. When they move on to college, plagiarism is a big issue. If they believe that changing the words makes the writing theirs, then they will be in for a hard lesson when their first writing class accuses them of plagiarizing. Since I deal with this every term, I know how important this lesson is for students.

Here I have merely provided my story. See, I’m not sure about other families or the other curricula that has been written since I was a kid, but for my family, we were taught to write just by plagiarizing. And somehow I doubt I’m the only one.

Probably the author of IEW, Andrew Pudewa, teaches parents how to strike the balance between citation and originality. The problem, as I have sought to demonstrate, is that not all parents are grasping this balance from a short training and valgue book. This is not entirely the fought of IEW. Undoubtably, part of the problem once again is that homeschool families have been unable to admit that parents do not possess superpowers that have mastered the ability to teach every subject at the high school level.

His idea that anyone can teach a high school student to write is perhaps potentially true but not necessarily true, if the parent has not gone through the process of learning to write well herself.

12 thoughts on “The Institute for Excellence in Writing”