Why HSLDA is Wrong about Romeike v. Holder, By Nikki

HA note: The following is reprinted with permission from Libby Anne’s blog Love Joy Feminism. It was a guest post by Nikki and originally published on Patheos on April 18, 2013.

Note from Libby Anne: If you follow the conservative media or have conservative facebook friends, you may know that there is a large brouhaha going on at the moment over the threatened deportation of a German homeschooling family that was originally granted asylum in the United States in 2010. Curious about the facts of the case, which conservatives are using as evidence of the evils of the Obama administration, the persecution of homeschoolers, and the fragility of American religious freedom, I asked a law student friend to explain the case for me—and for my readers. This information is critical for anyone interested in the Romeike case.

Before I get into the Romeike case, let me start with a quick legal outline. Under current U.S. law, “persons who have been persecuted or fear they will be persecuted on account of race, religion, nationality, and/or membership in a particular social group or political opinion” are eligible for asylum in the U.S. Upon arriving in the U.S., asylum-seekers file a petition for asylum. The petition is first seen in the Immigration Court, where an immigration judge rules upon it. Then, either the petitioner or the government may appeal the decision made by the immigration judge to the Board of Immigration Appeals. After the Board of Immigration Appeals issues its decision, a few specific types of cases, asylum among them, may be appealed to the federal circuit overseeing the jurisdiction where the petitioner lives (in the Romeike case, it’s the 6th circuit).

Now on to the Romeike case. German parents Uwe and Hannelore Romeike decided to homeschool their children because of concerns that the German public school system taught bad values and approved of witchcraft. Faced with fines, imprisonment, and the loss of custody of their children in the only European country where homeschooling is banned outright, the family fled to the United States in 2008. On January 26, 2010, an immigration judge granted the Romeikes asylum. The immigration judge held that the Romeike’s were “members of a particular social group” and concluded that they would face persecution for their religious beliefs should they be returned to Germany.

Homeschoolers are simply too “amorphous” to constitute a social group eligible for protection under the asylum law.

Note that asylum law does not depend on American constitutional rights.

Just because you have a right under the American constitution, that does not mean you will receive asylum because your home country does not recognize that right.

A prime example is the right to free speech. European countries tend to have a much narrower range of protections for speech, strongly limiting hate speech. Germany, for instance, forbids anyone from advocating for the Nazi party. Such a law would not survive a constitutional challenge in the United States. However, you cannot receive asylum in the United States if you are a Nazi sympathizer in Germany. This is because such a law would not be seen as “persecution” within the meaning of the asylum statute. Just as the Board of Immigration Appeals found that the Romeikes were not being persecuted because the compulsory attendance law was a law of general applicability to all Germans, no matter their religion or political beliefs, even so a generic “no hate speech” law under which pro-Nazi advocacy was banned would similarly not provide grounds for asylum.

How do you determine whether a government’s actions constitute persecution? You (gasp!) look at international law. For all the time and energy it spends lambasting international bodies and rights treaties, it is surprising that HSLDA is relying on international law for its arguments.

HSLDA contends that Germany’s compulsory attendance law is per se a religious liberty violation because its goal is the integration of minorities and avoidance of parallel societies. HSLDA is famously involved in all kinds of hyper-conservative political activities, and it’s amusing that the same populace known for their xenophobia and dislike of multiculturalism should now be upset with Germany for trying to encourage homogeneity within the populace. Germany’s policy is also little different than what occurred in the United States during the late 19th century, when public education was seen as a means to “Americanize” the millions of children immigrating every year.

Be that as it may, the 6th Circuit should not see the compulsory attendance law as an attack on religious liberty. Germany is not out to smother any particular religious group or even all religious groups—its goal is a shared experience. In light of the problems Germany has had with the large number of Turkish immigrants not assimilating, it’s not difficult to see that the Romeike’s have just found themselves at odds with a law of general application. After all, under our own 1st amendment jurisprudence, laws of general applicability are not seen as violations of religious liberty.

Note also the kind of precedent HSLDA’s argument would set. If homeschooling were sufficient to grant you asylum in the U.S., what other laws of general applicability in other countries could get you asylum here? Remember my Nazi advocacy example? That would be the tip of the iceberg. What about countries where private tun ownership is barred? or countries where wearing the burka in public is banned? This would mean a complete transformation in the way the Department of Justice handles asylum cases.

HSLDA also argues, alternatively, that German homeschoolers are a particular social group and that hence the Romeikes are being persecuted because of their inclusion in that group. This also seems to be a losing argument, because social groups must share “immutable characteristics.” “Immutable characteristics” is a term typically found in Equal Protection law and commonly refers to things like race or gender. HSLDA and its ilk has fought against expanding Equal Protection to include other characteristics such as sexual orientation, but now—since it suits them—they would like this phrase to be broadened to include “homeschooling,” because homeschooling is “fundamental to [asylum-seekers’] individual identities or consciences.”

The Department of Justice rightly contends that homeschooling is not an immutable characteristic because you can simply stop homeschooling.

Finally, a word about the meme going around (perpetuated by HSLDA), asking why Obama wants to give 11 million undocumented immigrants “amnesty” while seeking to deport the Romeike family. 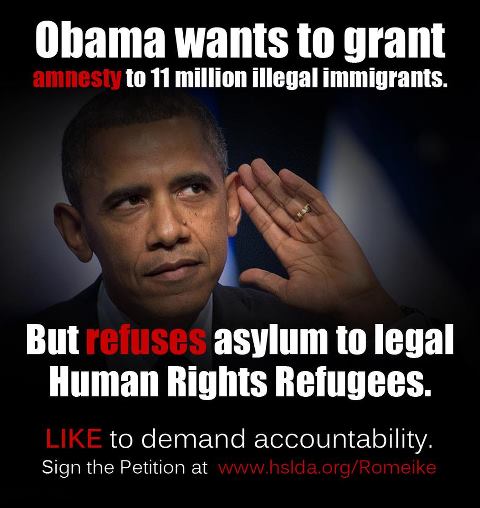 First, Obama himself is not the one making any decisions about the Romeike family. (And remember that the family was first granted asylum when Obama was in office, not Bush.) That is an agency decision made by people who are career attorneys within Department of Justice. Administrations come and go, but these career attorneys stay. Second, under the existing law, the Romeikes should be deported.

The administration is simply enforcing the law as to the Romeikes based on what the law currently says, just as the administration has done with the record number of immigrants it has deported over the past several years, not creating new laws or changing existing ones.

HSLDA would whine and complain if Obama used his prosecutorial discretion to not enforce the law against the illegal immigrants currently being deported. But now, for the Romeikes, HSLDA is asking for an exception to the rules. Why? Because HSLDA likes these illegal immigrants. You will not see HSLDA and its hyper-conservative supporters wanting the Obama administration to show this kind of compassion to the millions of individuals who came to the United States due to the poverty and violence in their home countries. Let those people find a life somewhere else, the fundamentalists working at HSLDA would say.

Well, the Romeikes can find a life somewhere else too—almost anywhere else in Europe but Germany.

Now that you’ve read Nikki’s coverage of the legal aspects of the Romeike case, how the case fits into asylum and immigration law, and why the case has been decided against the Romeikes at the present, I want to finish with a few closing thoughts.

First, if we could fix the immigration system so that the Romeikes could simply and easily move to the U.S. legally without having to apply for asylum, this problem would go away. And which side is generally against immigration reform?

Second, because of the ease with which people can move from one country to another within the European Union, the Romeikes could have simply moved to France or Switzerland or Austria, where homeschooling is legal. Instead, HSLDA attorney Mike Donnelly encouraged the Romeikes to move to the U.S. and apply for asylum, possibly with the intent of starting a court battle and having homeschooling declared a human right. in other wise, the Romeikes are being used as a political playing piece by HSLDA, the homeschool lobby, and conservative political hacks.

Third, the Romeikes are not at risk of being put on a plane to Germany and arrested on arrival. Their children are not in danger of being taken from them. The image above is deliberately communicating a falsehood. If their request for asylum is rejected, the Romeikes can go to any country which will accept them as immigrants—or any country in the EU—and will be given a time period in which to make these arrangements

Fourth, it is my position that whether or not homeschooling should be legal in Germany ought to be up to Germany. If the German people want to make homeschooling legal, great! But if they want to mandate that children must attend a formal school (public or private), I don’t have a problem with that. It’s their country, their constitution, their laws.

Fifth, I remember HSLDA talking about threats to German homeschoolers way back when I was a little girl, and I am firmly convinced that HSLDA is using the Romeike case, as it has used German cases before, to keep U.S. homeschoolers in a state of fear and keep them coming back to HSLDA to buy their legal insurance. Whether or not homeschooling is legal in Germany has absolutely no effect on whether it is legal in the U.S.

Sixth and finally, see this interesting fact checking article for more information for refuting bad arguments and information out there about the Romeike case, and also take a look at “Why German Homeschoolers Get Asylum and Torture Survivors Don’t.“

3 thoughts on “Why HSLDA is Wrong about Romeike v. Holder”