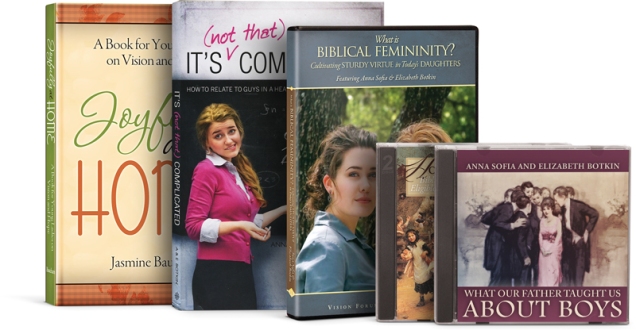 HA note: The following is reprinted with permission from Libby Anne’s blog Love Joy Feminism. It was originally published on Patheos on November 5, 2013.

My parents homeschooled me K-12, and during those years they fell under the influence of several Christian leaders who spread toxic dogma and find their following within the Christian homeschool movement. My parents never followed Gothard, but they did follow both Michael Pearl and Doug Phillips. I’ve talked a lot about how their devotion to Michael Pearl taught them to think that if they raised me “right” they could ensure that I stayed on the straight and narrow, copying my parents in my beliefs and in my lifestyle. But I think it’s worth fleshing out what my parents adherence to Vision Forum did to my life, because, well, let me put it this way:

Without Doug Phillips, I would have been spared an incredible amount of pain, grief, and yes, broken family relationships.

One of the signature teachings of Doug Phillips and Vision Forum is the idea that unmarried adult daughters are bound by God to obey their fathers. Yes, obey. I need to be extremely clear here: My parents did not believe this before they came under the influence of Doug Phillips. While Phillips is not the only person teaching this, he is, completely and totally, where my parents got this belief. I actually do not think my parents would have latched onto this idea had Doug Phillips never mounted a pulpit. One reason for this is that Michael Pearl himself has spoken out in recent years against the patriarchal ideas put out by Vision Forum. Had my parents not already bought the Vision Forum line regarding adult daughters, they certainly wouldn’t have gotten those ideas from the Pearls.

I considered not going to college. Oh, I came from an upper middle class home, college was always the expectation, and I’ve written before about why my parents did not follow Doug Phillips’ argument that parents should not send their daughters away to college. But I personally very strongly considered these arguments against college. I was enthralled by Vision Forum, which seemed to offer everything I’d been taught to want all tied up in a neat little package. I spoke with some friends, including some who tried to talk me out of going to college and did not go themselves based on very similar ideas. If things had been slightly different, Doug Phillips’ rise to prominence would have robbed me of a college education. And you know what?

There are women for whom this is exactly what happened.

Do you know what happened? A tidal wave of Vision Forum materials entered our home.

Oh yes, we’d already had plenty, but more began arriving day by day. I have a very distinct memory of running errands with my mom while she played a CD informing me that as an unmarried daughter, I was commanded by God to obey my father whether I understood, agreed, or wanted to. Tears were streaming down my mother’s cheeks as we drove from store to store running errands, and at each store she would order me to stay in the car and keep listening. She had a captive audience and she knew it. I have a very distinct memory of my mother, tears running down her cheeks once again, ordering me to take any theological question to my father, and to accept and believe what he told me.

This period of my life was the most painful I have ever experienced, and you know what? The most toxic of the beliefs driving this excruciatingly painful period of my life came into our home and into our family by way of Doug Phillips.

If my parents had accepted that I was an adult and that while they might not like my beliefs or choices, I was no longer duty bound to obey them, this period would have been much smoother. Yes, it would have still been tough. They had expected to produce a clone of their beliefs and lifestyle and that didn’t work out. But they wouldn’t have thought they had the right to try to make me obey my father. They wouldn’t have interpreted my actions as those of a willful daughter rebelling against her father’s rightful and god-given authority over her. My father wouldn’t have felt the need to formally put me “out from under his authority” for disobedience to his commands and my mother wouldn’t have spent the next six months convincing him that he had no biblical mandate for doing that.

My family was utterly rent to shreds during that period, and all because I deigned to think that I, as an adult, ought to be able to make up my own mind and make my own choices. I know he is not to blame for all of it, but I lay much of what happened during that time at the feet of Doug Phillips. That man and his ministry have caused me and my family an incredible amount of pain, and you know what? It wasn’t just us. Doug Phillips and the organizations he founded have wreaked this same havoc over family after family after family.

The rot that emanates from this man and his teachings goes deep in the Christian homeschool movement.

And that is why I care.

It turns out that even as Doug Phillips was preaching a doctrine of male authority over women in general and adult daughters more particular, he was out there making a lie of his entire premise. Because see, this entire thing is based on the idea that women are the weaker vessel, vulnerable and in need of godly male protection. But if Doug Phillips, Godly Male Protector Extraordinaire, can’t even remain faithful to the wife he is supposed to be protecting and shepherding, what does that say? And do you know what pictures are disappearing off of the Vision Forum sites? Those of the young adult daughters of Phillips’ colleagues and friends. If it turns out that Phillips conducted his affair with one of those young woman, what does that say of the reliability of the system he spent his life building, the system he convinced so many Christian homeschooling parents was the godly solution to a dangerous world?

Let me finish by quoting Lana of Wide Open Ground:

This is what Mr. Philips needs to do.

And then he needs to get out of his daughters’ way.

Yeah, that right there. He needs to say it.

6 thoughts on “How Doug Phillips Wreaked Havoc on My Family”