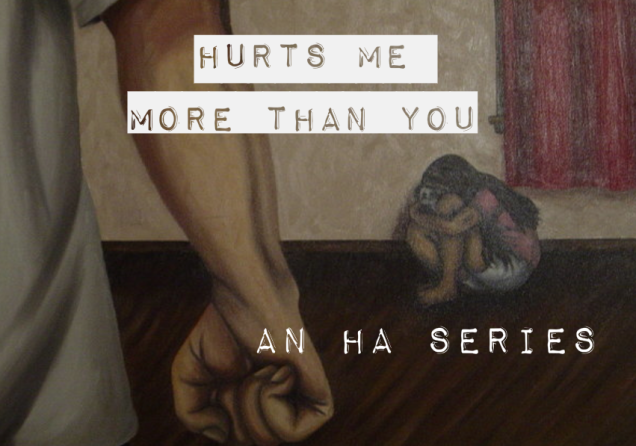 You know where you get punished for coloring?

Can you guess where your stubborn, imaginative baby’s gonna draw anyway? You guessed it baby. The temptation’s too strong. Even when your parents tell you not to, even when you know a spanking will follow. The urge to fill those empty dull spaces with the marks of your creative genius are too powerful to be denied.

Pain is a baffling thing, how it’s subjective and personal and always in flux, and apparently always “your own fault.” As the blows fall, some tiny voice in the brain braces against the sting with the mantra of “only have to make it to ten.”

Experience has taught that around the 10th you stop feeling the pain. The sting won’t bite so hard and the following burn won’t scorch so badly. “Hold your breath,” I tell myself… sometimes it doesn’t hurt so badly if you hold your breath, and with face down in their scratchy comforter I try to hang on. But then I’m betrayed by my own body. I was expecting a sensory overload and a full shutdown to see me through this ordeal. But I’ve never been swatted so many times, and at the thirteenth strike I’m ambushed by the pain again. The walls of ‘otherwhere’ I’ve built to protect me in this moment collapse inward and I’m drug under the burning blinding pain. Everything’s on fire, I’m on fire, in fact in that moment I could believe I’m made of fire.

That’s when the screaming truly starts. To her credit, my mother doesn’t shush me. She goes about her work of discipline as I go about mine of endurance. All told, there are twenty blows- accumulated for each time I draw on the walls. If I disobey again, there will be twenty-one in store for me. She has me sit beside her on the bed when it’s done, on my newly scorched flesh. We pray and she looks grim but determined to win this struggle. She reminds me that “we” agreed to this and I nod still crying.

I am seven years old, and I agreed this.

I’m seven years old, and I agreed to this… apparently.

When you’re a strong-willed child you learn so many things about spanking, about discipline in general. It becomes both the axis and guiding star to nearly every aspect of your life and your parents. Everything’s a battle of wills that your parents are going to win, no matter the cost.

I was spanked so many times growing up, and for so many reasons. I can say it was usually done in an emotionally restrained fashion. But I also can recall times I was hit from a state of rage. Once I was picked up by my lapels and shook. While my mother screamed that she wanted to throw me through the screen door onto the hood of our family car. I reminded her of that incident in my adult years … she didn’t remember, and chuckled as she hoped I had forgiven her. The worst spanking I ever received was for drawing on the walls. She set down an arrangement with me when I was seven, for every instance of vandalism I would receive an extra swat. I took twenty (20) blows before I plain stopped drawing altogether.

The chief instrument was a series of hard plastic cooking spoons. They sat next to the stove in a large wooden vase, like a bouquet of pain. To this day the sound of a spoon being drawn from the bunch causes my brothers and I to visibly flinch. My mother used to complain that I never wanted to learn to cook, but I wanted to be as far from those spoons as possible. Once I spoke to a school councilor about the spankings. It felt surreal, and when I told my mother, I had to spend the rest of the day comforting her.

As an adult I can actually withstand her screaming now. It’s easy to drift away and not care if she yells herself hoarse.

Though I spend a fair amount of time wondering if she’ll slap me … and if this time I’ll actually slap her back.

2 thoughts on “Hurts Me More Than You: Jessie’s Story”