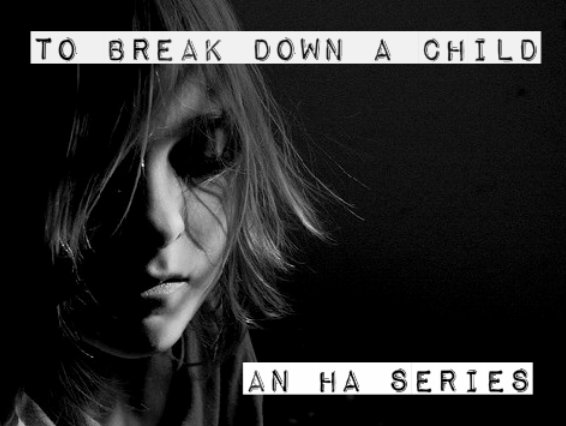 HA note: The following is reprinted with permission from Libby Anne’s blog Love Joy Feminism. It was originally published on Patheos on March 8, 2012.

Trigger warning for To Break Down a Child series: posts in this series may include detailed descriptions of corporal punishment and physical abuse and violence towards children.

I don’t know exactly when it happened, but at some point early on my mom handed me the rod. She told me I was to spank my younger siblings if they misbehaved or broke any rules and she was not in the room. The rule was that I could spank any sibling at least five years younger than me. This meant that at ten I could spank my five-year-old sibling, and all those younger than him.

This breaks my heart because now, years and years later, my younger siblings tell me they saw me as a bully, that they resented me, that I “lorded it over them.”

I may have been all that, and I definitely was far from perfect. Perhaps having this sort of power over them brought out the worst in me. But I was ten, twelve, or fourteen, and at the core I did what I did because my parents handed me the rod and told me to do so.

As to why my parents did this, the answer is not that difficult. With so very many children, my parents could not watch and discipline each of us individually. So they did what all Quiverfull/Christian Patriarchy parents do: they outsourced.

They outsourced their discipline method to me, and that method was the Pearls.

I was told that loving parents – or, er, siblings – discipline their children, and that the only way to make a child into a happy, healthy adult is to spank him. I was taught that children must have their wills broken and must be forced to submit. I did not generally spank my siblings out of malice (though I’ll admit to my shame that I sometimes did). I spanked them because I had been told to and did not know any better. I did not realize that as I spanked I was building a wall of resentment between me and my younger siblings.

I wish for all the world that I had been allowed to be a normal sister to my younger siblings. Instead I was put up as a second mother, an authority figure, a clone of my parents and their methods. I spent an enormous amount of time watching my younger siblings, both when my mother was in the house but occupied elsewhere and when my parents were away. I was expected to act as parent, not as sister, to my siblings.

Sixteen-month-old Faith reaches for a glass bowl on the coffee table.

Faith, no, don’t touch that.

Faith touches the glass bowl. *pop* I slap her hand. She looks startled.

Her little hand reaches out once again, her lower lip trembling. *pop*

Faith whimpers and looks like she’s going to cry, and I sigh. I gather her in my arms.

Faith, it’s okay, but I said no, and that means no.

She looks up at the glass bowl with pain and confusion in her face.

I learned to never give in to a child’s crying, and that even a baby could rebel. I learned to house proof the baby rather than baby proofing the house. As for slightly older kids, I frequently spanked four, five, or six-year-old siblings for “disobedience” or “insolence.” Obedience was expected to be immediate, completely, and without complaint. Even talking back was to be punished, often with spanking.

Judah, I told you to take this trash bag out.

I don’t care. You have to take it out or get a spank and take it out.

But I did it last time!

Alright, that’s it, you’re getting a spanking.

Why was I made to be an authority figure to my siblings instead of a sister?

My heart breaks because I inflicted pain on them. It hurts worse that I never questioned these things, never asked why, never said no. But what did I, at ten, twelve, or fourteen, know? What did I understand? I had never seen anything different from what my parents taught and modeled at home. My parents handed me the rod and told me to spank. And I regret it with all my heart. And now, all I can say is I am so so sorry.

I am today working on repairing my relationships with my siblings, relationships I unwittingly and unintentionally sabotaged all those years ago.

As for the future, I will never, ever put my children in this kind of situation.