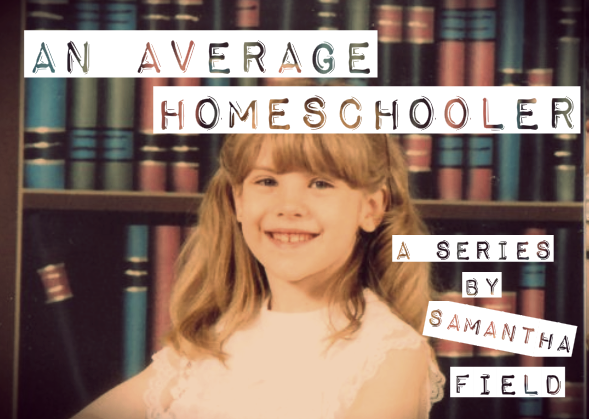 HA note: This series is reprinted with permission from Samantha Field’s blog, Defeating the Dragons. Part Eight of this series was originally published on December 17, 2013. Also by Samantha on HA: “We Had To Be So Much More Amazing”, “The Supposed Myth of Teenaged Adolescence”, “(Not) An Open Letter To The Pearls”,  “The Bikini and the Chocolate Cake”, and “Courting a Stranger.”

If you search for that term, you’re going to find a lot of articles and videos– some from homeschool kids, but most from homeschooling parents. Most of these articles tend to focus on emphasizing how homeschoolers aren’t strange weirdos, that not all homeschoolers are like that. These posts try to put as much distance between themselves and whatever they perceive to be a “fringe” group that they think make the rest of us look bad. Usually, what gets identified as the “fringe” group is the sort of homeschooling culture I’ve spent the last few days describing: conservative religious (they might say “fundamentalist”) homeschooling.

However, these groups are not as fringe as they’ve been portrayed, and the problem is, what’s “fringe” changes to suit whoever is talking. Kevin Swanson, probably one of the most extreme examples of conservative homeschooling, labeled the stories in the Homeschooling Apostate article “fringe“. Fringe, in the sense that many homeschooling advocates use it, doesn’t really mean “peripheral, not in the mainstream”; it means “a position that I think is more extreme than my own.”

I don’t want to spend a lot of time beating this one into the ground, but I’d just like to point the people who believe this in the direction of the major state homeschooling conferences. Who is coming to these gatherings– still some of the largest and best-attended events in homeschooling culture? Vision Forum. Institute in Basic Life Principles (ATI). Many of the state conventions invite conservative or fundamentalist speakers (like CHEO inviting the Chapmans, although they have apparently withdrawn).

Also, what’s still the most popular curricula? A Beka and BJUPress. Calling those “textbooks” anything but opportunities for fundamentalist indoctrination would be incredibly generous.

Who’s running most of the homeschooling culture media? Homeschooling World is probably still the most significant magazine, and their latest issues includes items like “4 spooky educational trends you should know about” and bemoaning girls who turn from “princesses” into “cowgirls,” articles on how to get your pre-schooler to memorize Bible verses daily, and other titles include words like “ominous” in reference to Common Core.

The Homeschool Legal Defense Association is one of the most powerful educational lobbying groups in America, and the agenda that they are constantly pushing represents an extremely conservative Christian position — in politics especially. Many of the avenues they pursue have nothing to do with homeschooling at all and are instead focused on keeping the US from ratifying the Convention on the Rights of Persons with Disabilities and making sure the Florida legislature stays homophobic.

Homeschoolers have no reason to be concerned about socialization; you’re doing your children a favor by sheltering them from the influences of The World.

Hopefully I’ve talked about that particular one enough.

Parents don’t need any form of higher education in order to be good teachers. You do not need training to teach your own children– concerns about high school level materials are misplaced. You can receive enough help to overcome any of the difficulties you might face teaching advanced subjects like chemistry and calculus.

Although many students successfully opt to self-teach or to learn together with an interested parent, the options for children extend well beyond the family. Some families choose to get together to form study groups around a particular subject and to hire a tutor. Some students opt for community college classes. Others barter help with one subject for help in another. Classes over the Internet or the television are increasingly available options for many families, as are videos and computer software.  Learning options are excellent and varied so there is something to meet the needs of every family. [source]

Yes, there are resources for parents who do not feel comfortable teaching the more difficult high school subjects. Personally, I feel that most intelligent parents are capable of homeschooling their child through the elementary grades– however, just because they’re capable doesn’t mean they should, and I think there are parents who should not be teaching even the elementary grades.

When their children hit high school, there are all sorts of opportunities to help balance out what parents might lack– dual enrollment at a community college, distance learning, etc. You might be able to tell that there is a gigantic however coming, and you’d be right:

Although many students successfully opt to self-teach …

Even this article that focuses on “debunking” homeschooling myths admits that self-teaching is the standard. I cannot stress this enough: with extraordinarily few exceptions, fifteen-year-olds are not capable of teaching themselves high school subjects. Yes, many of us are amazing readers and our language skills supposedly test off the charts (when we’re tested, and all of those numbers are self-reported, so, grain of salt). However, that does not mean that we are capable of teaching ourselves things like literary analysis and how to looks for themes and symbols. We are especially incapable of teaching ourselves math and science, however, and that is continually presented as an “acceptable” option for homeschoolers– even though math and science is a consistent weakness in homeschooling.

This does not mean that I don’t think that no one should be homeschooled through high school. I think even high school can be done successfully, but the problem is you have to go pretty far out of your way, and many of the resources available put too much financial pressure on families that were already having a hard time buying textbooks. If you can’t, realistically, take advantage of things like paying to hire a tutor or sending your high schooler to college, then do something else.

I find that particular argument to be extremely frustrating. Yes, I obviously love learning, and yes, that could be tied to my homeschooling background. However, and this is anecdotally speaking– I don’t think it’s really connected to being homeschooled. My parents helped give that to me, and they would have done that regardless of whether or not I was homeschooled. I have interacted with many homeschoolers in the last eight years who either hate learning or are so incredibly handicapped that even if they “love learning” they have none of the necessary tools to actually learn.

This idea is usually connected to what is hailed as “self-directed learning,” and unschooling advocates tend to talk about this a lot. Somehow, in these conversations, your child being “interested” in subjects and “pursuing” those interests is painted as being better than your child gaining a broad awareness and basic high school-level education. Speaking as a homeschool graduate who was permitted to pursue my own interests– I don’t use any of those skills today and I would really rather prefer being able to do algebra.

And… that about wraps up what I have to say. At least, until you all comment and get me thinking about something else I haven’t thought of yet! I’d just like to leave you with this: 20 Ways not to Respond to Homeschool Horror Stories.

4 thoughts on “An Average Homeschooler: Part Eight, In Summation”